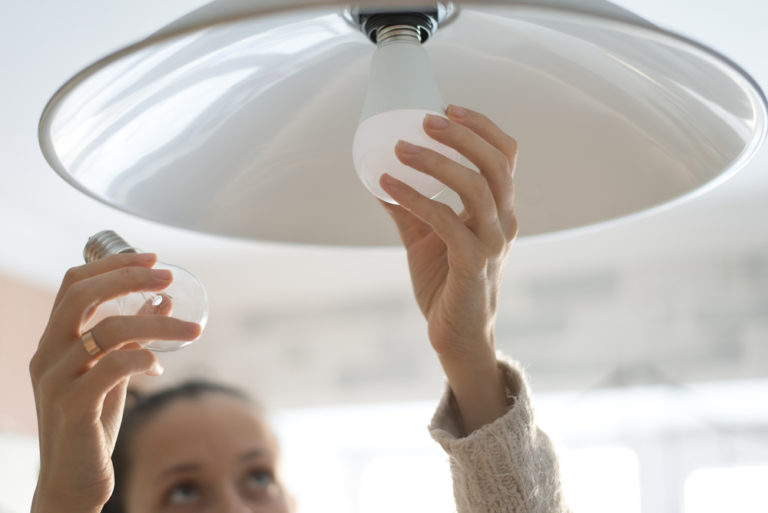 Not only do traditional “incandescent” lightbulbs have a much shorter lifespan, they also use excessive amounts of energy and cost a lot more money to buy in the long run.

LED lighting is the perfect choice for the environmentally conscious homeowner who’s looking to save money on their energy bill. However although more and more people are beginning to appreciate the benefits of LED lighting, there are still a lot of misconceptions and myths going around. As a leading LED lighting installer in Manchester, we here at Griff Services can shed some light on the most common myths to give you a clearer picture of how LEDs can benefit you.

Wrong. LED bulbs give off the same amount of light as traditional lighting. The main difference is that they use far less energy. Like with traditional bulbs or energy saving options, you can choose a LED light that shines with the familiar warm glow or go for one that closely mimics natural light. There’s a LED light for every need in your home.

Switching to LED costs a lot

True BUT…. although the initial cost of a LED bulb installation is higher, in the long run you will save money. LED’s also last a lot longer than other lightbulbs. In fact, a good LED will come with at least a five-year warranty. LED’s low energy use and longer lifespans make them the ideal choice for homeowners who are looking to save money on their bills and don’t want to go to the trouble of frequently changing their lightbulbs. A correctly tailored LED lighting upgrade by Griff Services Ltd can save you up to 90% on your energy bill.

*The cost of lighting is also dropping, meaning the cost difference between LED bulbs and traditional options are closer than ever before.

LEDs need time to warm up

False. Unlike fluorescent and energy-saving lamps that come on slowly or even flicker, LEDs shine with their full light output instantly after switching them on. It might surprise you to find out that non-LED lightbulbs work more like electric heaters. When switched on, they generate heat and only a very small amount of that heat energy is turned into light (around 10%). LED lightbulbs, on the other hand, do not need to generate heat in order to emit light, meaning that any energy used to power them is being directly converted to light.

Wrong… however LED bulbs do last a lot longer than the average light bulb. Like all light sources, they will eventually fade over but LED light bulbs will keep shining almost as brightly as they did when new for most of their lifetime whereas in comparison to incandescent bulbs which will noticeably fade in as short as 12 months.

As a leading LED lighting installer in Manchester, we here at Griff Services are more than equipped to provide bespoke lighting solutions tailored to your individual needs.

Find out more about LED lighting here and contact us for a free installation quote.